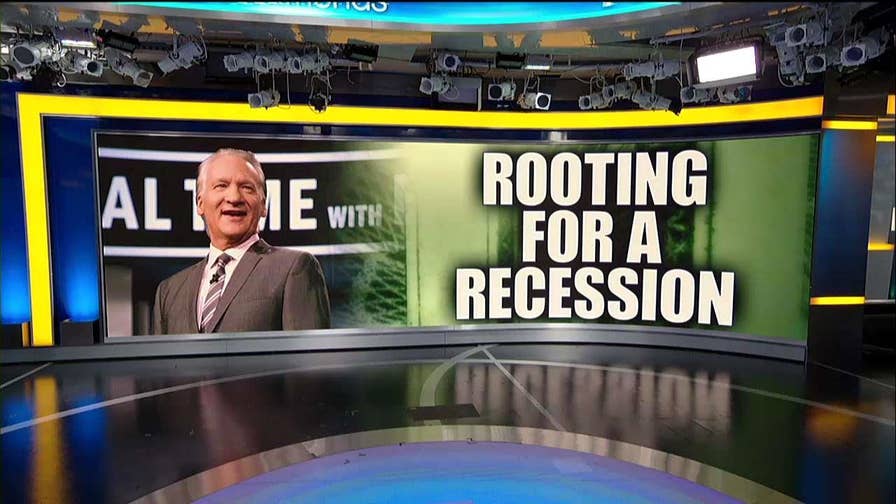 Bill Maher Hoping for Economic Recession to Get Rid of Trump

Bill Maher doubled down tonight on his hope that an economic recession might turn the country against President Donald Trump. During the New Rules segment of HBO’s “Real Time With Bill Maher” tonight, the host immediately addressed “anyone who went apeshit the last two weeks” since he first mentioned the recession-as-weapon in the battle against Trump.

“A recession is a survivable event, ” Maher said. “What Trump is doing to this country is not. Democracy is about to go the route of the dinosaurs because we’ve been taken over by a dodo bird.

“So let me repeat, a recession is a survivable event- we’ve survived one every time a Republican is in the White House. Every Republican president since Teddy Roosevelt has presided over a recession…the United States has survived 47 recession in all. Since the Great Depression, we’ve never gone more than 10 years without one.Another recession is coming , not because I’m rooting for it, but because person passed a giant tax giveaway to the rich that added trillions to the debt, and started a trade war for no reason and purposely sabotaged the affordable care act and rolled back the rules for banks so that they are able to once again gamble with our money.”

Maher specifically took on members of the “right-wing nut-osphere” who he said painted him as a bigger menace to the U.S. security than Canada. Like Laura Ingraham, who incorrectly said Maher wanted “economic collapse, ” and Alex Jones, who, Maher said, tweeted that the HBO host has $100 million, a figure picked up by others on the Right.

He reserved his sharpest attack for Mike Cernovich, thealt-right social media personality who apparently pointed out that suicides increase during recession, thus accusing Maher of wanting people to succumb. Yes, said Maher sarcastically, specifically Mike Cernovich, who he suggested should stick his head in an oven so starved kids can use it for food.

“No, I don’t want that, ” Maher retreated, get serious. “I don’t know who the f* ck you are Mike Cernovich, but I want you to live a long, healthy life and get the help you so desperately need.”

Finally, Maher returned to his notion of survivable recessions being preferable to fallen republics. “If a recession is what it takes to make Donald Trump not so cute anymore, then bring it on, ” he said, comparing a booming economy during a bad presidency to great sex in a bad relationship. “I just want America to say about Donald Trump what everybody in a relationship says when the hot sexuality wears off: What the f— am I doing with this person? ”