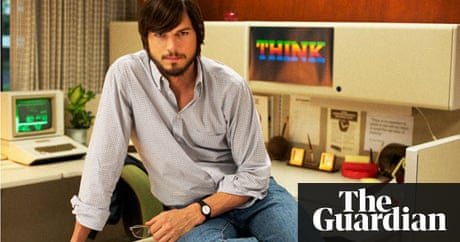 Christian Bale is rumoured to have lived on coffee and one apple a day to achieve his emaciated physique in The Machinist. But not everyone is suited to unorthodox diets, as Ashton Kutcher discovered after adopting the late Steve Jobs’s fruitarian regimen in preparation for a new biopic of the technology magnate.

Speaking at the premiere of Jobs at the Sundance film festival on Friday night, Kutcher revealed that he went to hospital with pancreas problems after following a strict diet of fruit, nuts and seeds. Jobs, who was often reported to be a fruitarian, died of pancreatic cancer in October last year.

“First of all, the fruitarian diet can lead to, like, severe issues, ” Kutcher told USA Today. “I went to the hospital like two days before we started shooting the movie. I was like doubled over in pain. My pancreas levels were completely out of whack. It was truly scaring … considering everything.”

Kutcher also revealed that he spent hundreds of hours studying videotapes of Jobs in an effort to accurately replicate his hunched walking and peculiarities. The actor said that he felt close to the Apple founder as they shared a fascination for “tech space”. He also revealed an admiration for his subject’s ability to bounce back after periods of struggle.

“He’s a guy that failed and got back on the pony, ” said Kutcher. “I think we can all sort of relate to that in some place in our life where we are moving forward with something and we fall down. You have to have the guts to get back up and go again. I guess I share that as well.”

Jobs, which covers the period from Apple’s founding in a garage in Palo Alto, California to the launch of the iPod in 2001, has so far received a lukewarm response from critics. Variety’s Justin Chang said Joshua Michael Stern’s film “more or less embodies the sort of bland, go-with-the-flow creative thinking Jobs himself would have scorned”, while CNET’s Casey Newton was unimpressed by a movie in which “the viewer spends two hours watching cardboard cutouts lose arguments to Ashton Kutcher”. Indiewire’s Eric Kohn, however, praised “Kutcher’s perpetrated performance, certainly his most impressive turn in years, which gives the character’s focused, manipulative intents in each calculated look”.

Aaron Sorkin, the Oscar-winning writer of The Social Network, is planning a separate biopic based on Walter Isaacson’s bestselling official biography of Jobs. Sorkin’s version will reportedly comprise merely three widened scenes, each capturing a point just before a vital product launch in order to portray Jobs and his biggest successes.