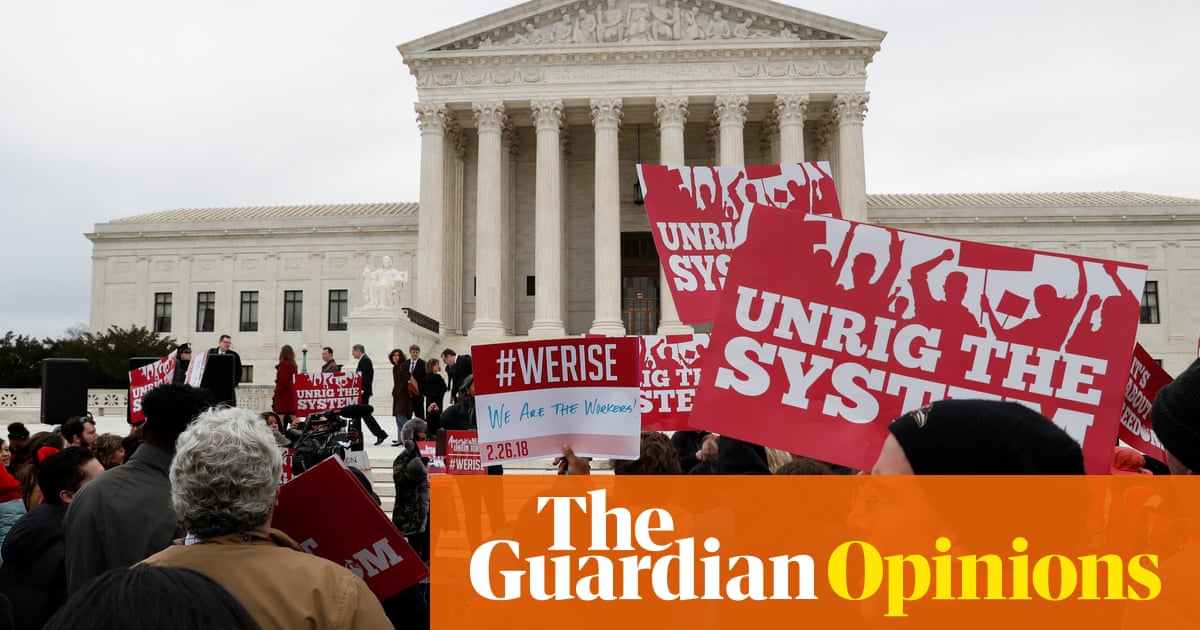 During the March on Washington in 1963, Dr Martin Luther King Jr spoke about” the fierce importance of now”, underscoring the immediate and pressing need to take strong and immediate action to advance civil rights. It couldn’t wait. Today, communities across the country find themselves in a similar moment, opposing legislators who are hellbent on legislating Donald Trump’s noxious agenda of inequality and injustice.

The most recent incarnation: a supreme court case, Janus v AFSCME Council 31, intent on stripping away the rights of working people to join together in their unions, an attack on a basic American right.

The same politicians who have built health care less accessible, rolled back voting rights, defunded our schools, and polluted our air and water have brought this attack to our nation’s highest court “ve been trying to” dismantle the organizing power of working man in unions.

For decades, Republican have chipped away at collective bargaining. This year, they are swaying with the axe, because they fear the voices of working people who speak the truth. Voices that are loud enough to be heard and put at risk their plan to twist our government to work against the people and in favor of the powerful. Voices the hell is loud enough to demand fairer terms not only for union members, but for all of us.

When that voice is stillness, we watch life get the hell out of here for only those at the top, at the expense of everyday Americans. We see it when some CEOs and politicians deny working people the ability to join together to have a say over their jobs and are forced to work multiple tasks to make ends meet. We see it when children in Flint don’t have clean drinking water, and when children in Texas can’t play outside. We see it when women can’t access necessary reproductive healthcare and are unable to make their own decisions about their economic futures and lives.

We are facing systemic underinvestment in the things that matter for America’s working households- education, public transportation and healthcare. And it is those same households who also pay the highest price for pollution, whether it’s leading in drinking water or dangerous chemicals in the air.

Oil and gas companies are still promoted through pipelines that poison groundwater and farms in communities that don’t have the resources to fight back. These companies and the legislators that do their bidding seem to think that some Americans are expendable- poor children, communities of color, immigrants, women and workers. Their message is clear: we want the money, you can take the health consequences.

As a nation, we cannot let the injustice in our economy and in our political system that cheats median people and undermines any promise of a better and more dignified life. Our survival as a democratic nation varies depending on us- the only route to protect our republic and defy the attacks on our people like the one confront us now at the supreme court is to kind a unified progressive coalition and face down extremists at every turn.

That’s why NextGen America and other organizations joined with leaders from the women’s and civil rights motions, labor unions, religious leaders and working man for a massive nationwide day of action on 24 February- two days before the supreme court hears oral debates on the Janus case.

We’re uniting in dozens of cities across the country for the Working People’s Day of Action to let big corporations and their friends in Washington know that they can’t rig the standard rules against us anymore, to ensure that our children have a place to grow up safe, and to demand that we all have a fair shake at living a full and healthy life.

For climate activists, this tactic from big business and the legislators they bankroll is nothing new. These same forces have worked hard and long to block efforts to address our energy crisis, cut pollution and bring new renewable energy technology to marketplace faster. Environmental justice depends on our ability to organize together for real action to address the climate crisis. We all have a right to stand together for a better future, and we won’t let corporate interests use the US supreme court as a pawn in their effort to take out that right.

It is time to recognize anew” the fierce urgency of now ,” to stand united, and to raise our unified voice for a positive agenda that puts the American people ahead of corporate profits. Now is the time to rebuild a clean America- adopting a clean energy future that creates the well-paying, stable, union tasks of the 21 st century. And now is the time to raise our unified voice for our deepest values, for what’s best for working person and our families, and for what’s going to preserve the promise of our democracy: a nation of equal rights, equal justice and equal opportunity for all.

Tom Steyer is the founder of NextGen America, an ecological advocacy nonprofit and political action committee.